Kari Suomalainen was not only a political cartoonist, but also a painter, an author, a composer and a playwright. In a career lasting half a century, Kari established the culture of political cartoons in Finland, particularly during the long years of the cold war when he was often the lone public voice speaking out against Finland’s giant neighbor. Kari drew for Finland’s largest selling newspaper Helsingin Sanomat for over 40 years. During this time Finnish people came to love his infallible drawings, his sharp opinions and observations. He was a very well known and admired personality whose influence on Finnish culture and politics cannot be underestimated.

Kari received many national and international awards, for example, The National Cartoonist Society of USA Award in 1959 and the title of Professor in 1977. He retired from Helsingin Sanomat in 1990, but continued drawing his caricatures for local newspapers until the summer of 1999. 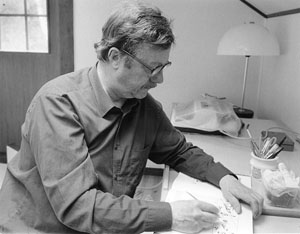