Emil Wikström studied art in Finnish Art Association’s drawing school in Turku and Helsinki, in Art Academy in Vienna and also in Académie Julian école des arts Decoratif in Paris. At his time “art nouveau”, “jugend” and “arts & crafts movement” were gaining popularity in Europe and these ideologies also inspired Finnish artists. In Finland this era was called “National Romanticism” and Wikström as well as other artists sought inspiration and motifs for their art from their own country’s cultural heritage and mythology. Finnish artists studying and working in Paris longed for their country’s unspoiled nature, and air laden with the fragrance of resin. Some decided to retreat to “the wilderness of Finland to build crofts for ourselves” as Wikström reported in a letter to Axel Gallén dated 1898. Wikström was the first to carry out his plan and he found ideal place for himself in Sääksmäki by Lake Vanaja.

In Visavuori, Emil Wikström sculpted most of his work and many original casts and studies are now exhibited in the Visavuori museum. Emil Wikström was the most important Finnish sculptor of his time. Best remembered for his grand public monuments in Helsinki and other cities across Finland, Wikström produced portraits of many statesmen, politicians, businessmen, family and friends, as well as figures from Finnish mythology. 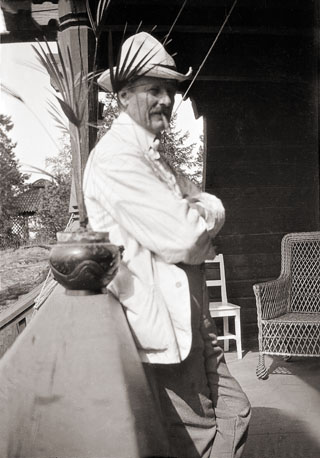